Christ, Be Our Light!:
Reflections on Christmas, Chanukkah, and Strange Physics

"This then is the message which we have heard of him, and declare unto you, that God is light, and in him is no darkness at all."  First Letter of John 1:5 (KJV)


"All these fifty years of conscious brooding have brought me no nearer to the answer to the question, 'What are light quanta?' Nowadays every Tom, Dick and Harry thinks he knows it, but he is mistaken." Albert Einstein, in 'The Born-Einstein Letters', by Max Born

Oh, star of wonder, star of might
Star with royal beauty bright
Westward leading
Still proceeding
Guide us to the perfect light
Refrain, "We Three Kings"

Some 80 years ago (more or less) when I was a child, I would pester my Jewish parents (secular, non-religious) for a Christmas Tree.   All around me would be the lights of Christmas--on houses, lawns, and downtown (there was a downtown in those days) in the glorious department store window displays--and I didn't understand why we couldn't take part in all that.  I listened to explanations that we weren't Christians, we had our own holiday, Chanukkah; but the eight lights of the Menorah didn't hold a candle (so to speak) to those on any modest Christmas tree, and even though there were eight days of gifts, they were all small potatoes compared to those my Christian friends received on the one day of Christmas.

It took  almost 10 years after my conversion to the faith to realize the full import of Christmas, and even that of Chanukkah, the Festival of Lights.  During the first few years after my conversion I still did not feel totally comfortable during the Christmas holidays--more like the hungry tramp peering into the restaurant window, an outsider.  It took a little while for me to go beyond the gift-giving and realize the miracle of the Incarnation.   And so my prayer before the third decade of the Joyful Mysteries of the Rosary was and is that Christmas be celebrated as the Incarnation, the birthday of Jesus.

I'd like to share my thoughts about these things--informed by my faith as a Catholic, my heritage as a Jew, and my vocation as a physicist.    They won't be given in the order of importance--saving the best for last.

Here's a brief account of the story behind the verse from First Maccabees quoted above.  (For more details, see here.)   The Maccabees had revolted against the Syrian ruler, Antiochus, who had tried to instill Greek values and religion on the Jews.  And as the Talmud recounts the tale, in their recapture of the Temple and its rededication to the one true God, they found there was oil for the lamps that would only last one day, they filled the lamps and lo and behold, the oil lasted eight days--a miracle!

The holiday is not one of the major Jewish holidays.   In my opinion, it has become more important in recent times as a counterweight to Christmas.

Eight candles are lit in the Chanukkah menorah (one for each day the Temple lamps burnt).   And children receive a present each day, including "Chanukah gelt" (money).   Latkes (potato pancakes) are also a tradition**--

It is a joyous time, celebrating freedom to worship. and the songs are among the best in the Jewish and Yiddish folk tradition.   One of my favorites is that by the Klezmatic Conservatory Band, Oy Chanukkah; and here are the lyrics.  Note in the last verse, the element of light:
"Oh, Hanukkah, Oh, Hanukkah,
Come light the menorah
Let's have a party.
We'll all dance the hora
To remind us of days long ago
One for each night, they shed a sweet light,
To remind us of days long ago."

I will concede that there is no great theological significance here.

There was a young lady named Bright,
Whose speed was far faster than light.
She set out one day
In a relative way,
And returned on the preceding night.
--Edward Lear? A.H. Buller?

Classical physics treated light as an electromagnetic wave, a linked oscillation of electric and magnetic fields. In the early 20th century Einstein's explanation of the photo-electric effect gave light a second personality, that of a particle. This light particle, a photon, has no mass and travels at the speed of light (which is unremarkable, given that it is light).

Time-dilation enters here: special relativity says that time goes more slowly (stretches out, so-to-speak) as the speed of objects approach the speed of light. This is the basis of the so-called twin paradox: time will go more slowly for a twin traveling close to the speed of light than for his twin on stationary earth, so that when he return from his voyage, the paradox will have it that he has aged less than his twin, as illustrated below: 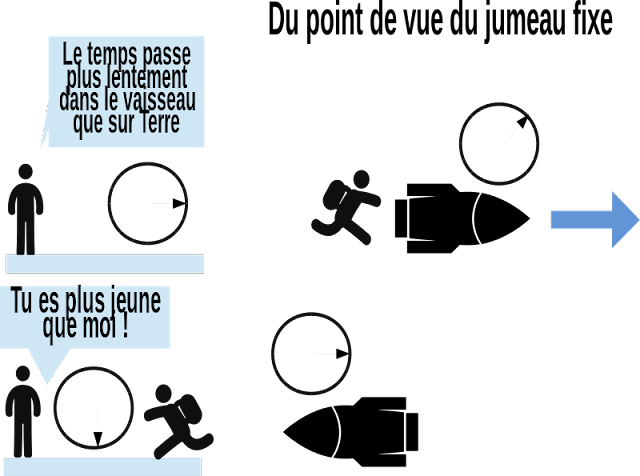 French translation: In the reference frame ("point of view") for the stationary (earth-bound) twin;
Time goes more slowly in the spaceship than on earth;
You are younger than I!
From Wikimedia Commons


Now there are objections to this simple minded picture. For example, suppose one regards the spaceship as stationary and the earth as moving away and returning--then the twin on earth would be younger when reunion occurs (see here for the analogous illustration.) There are number of other effects that complicate the analysis--time dilation on acceleration and de-acceleration (see here for a detailed account.) Time dilation is a real effect, manifested in longer decay times of energetic cosmic ray particles, in the very slight slowing down of atomic clocks in orbiting satellites (that has to be taken into account in GPS tracking).

From all the above the first thought might be that time does not pass for a photon. However, we can't say that time can be measured for a photon in a reference frame moving at the speed of light.  Why? A fundamental assumption of special relativity is that measurements are ultimately made by the agency of light signals:  light is the measuring agent and light can't measure itself. So it's more appropriate to think that a photon does not, in its own frame of reference, experience time. If a photon could be aware, its moment of creation (by emission of light--say an electron falling from a high energy level to a lower) to its annihilation (by absorption of light--say, an electron jumping from a low energy level to a higher) would be simultaneous.

Are there any theological implications in no-time for photons, for light? Well, here's an off-the-wall thought: we say that there is no time for God,

So the idea that God is light implies also that all times co-exist for God.

THE THEOLOGY OF LIGHT?

"Then spake Jesus again unto them, saying, I am the light of the world: he that followeth me shall not walk in darkness, but shall have the light of life." John 8:12 (KJV)

"The light of the body is the eye: therefore when thine eye is single, thy whole body also is full of light; but when [thine eye] is evil, thy body also [is] full of darkness." Luke 11:34 (KJV)

And there are many more.

The Greek word in the New Testament that was translated as "Word" is "λόγος" ("logos"). In addition to the meaning "word", other general meanings are "principle", "reason", "logic."  Let's think about the relation between "light" and "logos".  What do we mean when we say "I see the light!"? We see the reason, the truth, the rationale, the principle  in what is said. So light, reason, the Word are connected. And when John wrote "in the beginning was the Word" and in Genesis we read "And God said 'let there be light' " we have an equivalence.

Your comments and criticisms are invited.  (By the way, Ahura Mazda, the God, was embodied in light in Zoroastrianism--so I hope in this reflection I haven't made a heretical comparison to that early religion.)


*The two different spellings reflect the guttural Ch sound for Chanukkah in Yiddish, and the Anglicized H sound.

**This year the night before Chanukkah, my wife, a cradle Catholic and more versed in Jewish tradition and cooking than was my mother, made latkes that would be a prize winner on Chopped.

***For a more complete explanation of the dual nature of light, and the historical development of this physics that gave this picture, see The Quantum Catholic.
Posted by duhem at 10:38 PM No comments:

As I was doing my nightly reading of  Augustine Day by Day, it struck me how appropriate the readings were for Advent, so I'd like to share them.
(Presumably the editor for this book,
John Rotelle, chose them for this very reason.)


"Now is the time of mercy, for us to correct ourselves. The time for judgment has not yet come. There is no need to despair.Because of our human, pardonable, and more trivial sins, God has established in the Church set times for requesting mercy. We have a daily medicine in our saying 'forgive us our debts as we forgive our debtors,' so that we may share in the Body and Blood of Christ. Sermon 17,5


"My brothers and sisters, believe firmly what you believe--that Christ will return.  What does it matter when?  Prepare yourself for his coming.Live as though He were coming today, and you will not fear His coming.  Sermon 265, 3-4


"Knowing that the last day is coming is useful to us, and not knowing when it is coming is just as useful.  Thus, we may have no fear of that day, but even love it.  for that day increases the tasks of unbelievers but ends the tasks of believers.It is now in your power to choose which of these possibilities you desire, before that day arrives.   But once it has arrived, this possibility will no longer exist.  [emphasis added]  So make your choice now, while you have time, because God mercifully delays what He conceals."   Commentary on Psalm 36, 1

December 10th, "The Coming of Christ:"


"The only Son of God was to come to earth, to become a man, and in this nature to be born as man.  He was to die, to rise again, to ascend to heaven, to sit at the right hand of the Father, and to fulfill His promises among the nations.After that He was to come again to execute His threats against the wicked and to reward the just as He had promised."  Commentary on Psalm 110, 3

*Remember, there will be a Penance Service during Advent.  Ours is December 12th.