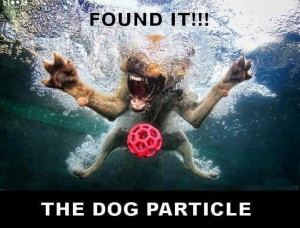 LET’S HEAR IT FOR THE DOG PARTICLE!
There’s been much sturm und drang about CERN’s report of finding a Higgs-like boson, the so-called “God-particle”.    I’m currently writing up an abbreviated history of the scientific route to this experimental result, as an attempt to place all this in a context of how science works and what it can and cannot tell us about our universe.   In the meantime, here are three links that do give a balanced perspective:
“All Things Visible and Invisible” (note the phrase taken from the Credo)
“Vatican Astronomer: ‘God Particle’ is Exciting but Has No Theological Bearing.”
“The God Particle and God”
The last article has a particularly relevant sub-title: “Without God scientific discoveries have no meaning”.     Those who have proclaimed that creation is explained by the “discovery” of the Higgs Boson (i.e. finding the spoor of a Higgs-like boson), are not familiar with the philosophic Principle of Sufficient Reason–you need to know the answers to questions about things, to explain where and how they came to be, in order to understand them–that’s how the human mind works.    And a theory or a particle (i.e what one infers from observed phenomena,  is a particle) or a field (i.e. what we propose as a mechanism for observed natural phenomena) does not explain itself.   The only entity that does explain itself, that is the uncaused cause, is, by definition, God.
An addendum to this post, or perhaps a separate post, will summarize the relevant history of particle physics leading to evidence for the Higgs boson, and how this history embodies a development of  symmetry considerations that do themselves “Declare the Glory of God”.  (That is to say, I will do the best I can as such a guide–somewhat like Gollum leading Frodo and Sam through the Swamps of the Dead).
Posted by duhem at 8:22 PM