Are We Hard-wired for Faith? The Religious Experience and Neuro-imaging.


"Prayer is the raising of one's mind and heart to God" St. John Damascene, as quoted in the Catechism, 2559.

“The mind is its own place, and in itself can make a heaven of hell, a hell of heaven..” John Milton, Paradise Lost"

"Interestingly, the average human brain weighs about 1.5 kilograms, has about 160 billion cells and about 100 billion neurons connecting the cells. The complexities of the brain are inconceivable. One can look at the brain and see the incredible complexities and the miracles of the Divine ...or one can respond ... that this has nothing to do with G-d. Some people will be inspired with belief in the Almighty; others will claim that somehow billions of cells and neurons working together can be created through random evolution."  Rabbi Dr. Warren Goldstein, Jewish World Review, 17 January, 2014

My favorite way to spend driving time is listening to audiobooks, the latest being "The Spiritual Brain: Science and Religious Experience" by Professor Andrew Newberg.  (Hey...it's better than texting!).     Dr. Newberg, Director of Research at the Myrna Brind Center for Integrative Medicine at the Thomas Jefferson University Hospital, has used SPECT imaging (Single Photon Emission Computed Tomography)  to show what brain regions (and thus, what brain functions) are activated or deactivated by such religious acts as prayer, meditation, contemplation.   The technique involves intravenous injection of a radioactive chemical that is metabolized by the brain during activity;  the metabolic act/brain activity occurs almost immediately after injection, and enough residual radioactivity remains for it to be detected by imaging carried out a short time after the injection.

Another technique, fMRI (functional magnetic resonance imaging) has also been used to correlate brain activity with religious/spiritual acts.    Based on my own experience in MRI (both as a subject and as an MRI research physicist), I would credit SPECT results more than fMRI for studying the religious experience.   The imaging of metabolic activity in fMRI is real-time, so it is carried on during the act of brain metabolism.   One is constrained to lie within a narrow tube, so for those with more than average girth (myself included), this leads to a feeling of claustrophobia, not always conducive to spiritual calm.   Moreover, in order to achieve the high-speed imaging required for  fMRI, intense field gradient pulses are used, which are exceedingly noisy and distracting, as one study has shown.    Therefore we will focus on the SPECT results, even though they suffer from a lower spatial and temporal resolution than fMRI.

Before discussing Newberg's experiments and interpretation, I want to set forth two relevant issues, which will be addressed in more detail at the end of this post: the first question, "Is mind purely material--is the brain simply a meat computer or something more/other?"; the second question, "Given the relation between brain function and religious experience, how was this acquired--by adaptive evolution or bestowed by God?"   If it were possible to build a self-aware android--Data of Star Trek--would that android naturally have a religious sense, or would it have to be endowed by his creator?

Let's start off with a condensed discussion about which brain regions are important for various cognitive and emotional functions (for more details please see the web presentation by  Professor Elaine Hull or books by Dr. Newberg, Why God Won't Go Away and/or How God Changes Your Brain. 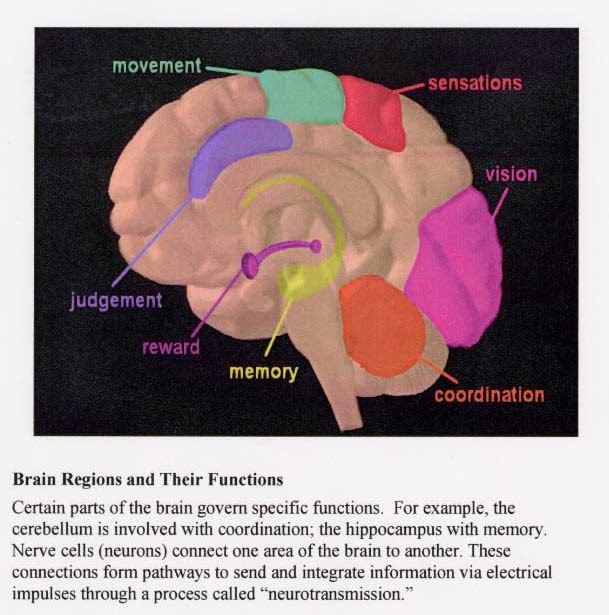 Without anatomical nomenclature (see web references),  the figure at the left shows what regions of the brain are involved in various cognitive and emotional functions.   Now the interesting result for Prof. Newberg's study is that such regions are activated  or deactivated (as appropriate) in different ways during prayer or contemplation of the Deity by those experienced in prayer and by atheists.
His early study was on Franciscan Nuns who had decades of experience in contemplative prayer.   During the act of prayer the "attention" and "language" regions of the brain were more activated than for a baseline study while the spatial orientation (sense of location) were deactivated, as shown in the figures below.

In the figure at the right, the brain image under "Baseline Scan" is taken during "normal" activity (no prayer or meditation).  The image under "Prayer Scan" is the brain image corresponding to intense  Centered Prayer.   In the prayer image, the frontal lobe region ("attention") is red, more activated  than during the baseline.   Similarly, the "language center" (lower left) is more activated (redder) during prayer than for the baseline.  (Metabolic activity of the brain is color coded--blue is least, red is most; the color coding is on a relative, not absolute scale.   Prof. Newberg notes that changes in brain activity are more evident on a gray scale than with the color coding.)
The figure at the right is also a SPECT scan image of one of the Franciscan nuns.    Note the less intense  spatial orientation area during prayer (yellow versus red).  Prof. Newberg argues  that the lower activity of the orientation area corresponds to a feeling of losing self, of oneness with the universe, a feeling  often associated with deep meditation and contemplation.   The same sort of changes are found for other adepts at meditation, for example, for Buddhist monks.     On the other hand, an atheist contemplating God (or his/her notion of God) shows little change in brain activity,
as shown in the figure above.

These examples are a small part of the body of work published by Newberg and other researchers on imaging that show how functional changes in brain activity differ between believers and non-believers during prayer, meditation, contemplation and speaking in tongues.  Other work also is relevant: studies of chemicals involved in neural transmission show changes in the regions of the brain governing emotional reactions and pleasure centers.

One MRI study cited by Newberg (I can't find the original reference) finds that those practicing prayer and contemplation have larger frontal lobes (concerned with attention and focussing activity) than do non-practitioners.  Since this was not a study over time, one can't know whether the  prayer / contemplation activity is a consequence of the greater size or  that the brain has increased in size after years of prayer.    With some knowledge of statistical practices amongst radiologists (I've seen published figures with regression lines drawn through scatterplots that looked like random shots at a barn wall), I'm going to be skeptical of this result until I go through the paper itself.

Newberg also proposes that the practice of prayer/meditation will improve brain function, memory, and help alleviate various kinds of brain dysfunction.   One point Newberg raises is quite important:  if religious experience modifies brain activity, and if one has a sudden conversion experience, how can that change brain activity if it is due only to some physical mechanism?   Changes in the physiology of the brain take time, they're not accomplished in an instant.

Let's accept the proposition that changes in functional brain activity can be correlated with prayer, contemplation and other religious activity.   What then?  Is it the case, as Newberg proposes in the title for his book, that God changes the brains of the faithful?  Is it the case, as he also proposes, that the functional correlation of brain activity with religious activity is due to adaptive evolution?

I'll tackle the second question first, because it is easier to deal with.   The notion of adaptive evolution rests on a Darwinian mechanism for evolution--that prayer increases survival prospects and thus the transmission of a genetic predisposition to prayer is enhanced.   Now both Pope John Paul II and I believe that evolution--the descent of species--is more than just a hypothesis.   However, as far as the Darwinian model goes, some scientists and philosophers--faithful and non-believers--and I are skeptical;  the Scottish verdict "Not Proven" applies.

Consider the example Newberg gives:  a prehistoric savage chieftain is distraught over the death of a comrade and while watching the flames of a funeral pyre conceives of the spirit of the comrade going above, like the flames, and finds peace.    I find it hard to credit that a disposition to think of an afterlife is 1) genetically implanted and inheritable and 2) contributes to survival.    Granted that general qualities--intelligence, the ability to form abstractions, imagination--may be due to genetic endowments and will therefore enhance survivability, that does not imply that particular aspects of those qualities are also due to particular genes.   Indeed, the so called "God gene" proposal rests on minimal statistical evidence.  As  Carl Zimmer's criticism would have it:


"Instead the book we have today would be better titled: A Gene That Accounts for Less Than One Percent of the Variance Found in Scores on Psychological Questionnaires Designed to Measure a Factor Called Self-Transcendence, Which Can Signify Everything from Belonging to the Green Party to Believing in ESP, According to One Unpublished, Unreplicated Study." Carl Zimmer, Scientific American Review of "The God Gene".

I think we can dispose of the argument that religious feelings have been engendered by adaptive evolution, or at least conclude that this proposition is not proven.     The deeper and more difficult question is the nature and source of religious experience.    If mind and consciousness are but emergent properties of a meat computer, the brain, then are religious feelings due only to fortuitous neural physiology, as philosophers such as Dennett, Churchland, Chalmers, would propose?   Or, do  these thoughts and experiences come from another source, the Holy Spirit?

To address this question adequately requires a book at the very least: one would have to consider the nature of "Mind" and "Consciousness", and that is a matter distinct from labeling the neuro-physiological factors at play during a religious experience.*  Quantum mechanics may have a role, as suggested in two of my previous blogs, "Do quantum entities have free will.."and "Quantum  Intervention via God, the Berkeleyan Observer"  and by several philosophers and physicists**.

An aspect of this problem that has not been explored fully by philosophers is the growth of self-awareness/consciousness and intelligence.   We are born with only a rudimentary sense of self, and this progresses through infancy and early childhood  in several stages to a more complete development, five stages according to Philippe Rochat.   How does this development proceed?  Is it genetically programmed?

Finally, I can only say that I don't have enough knowledge to come to a conclusion.   Although it seems evident from the arguments of Penrose and Searle that our brain is not a meat computer, it is not clear to me how the mental and physical elements of consciousness are separable.   I think that quantum mechanics plays a part in consciousness, but I don't know how that can be specified.    I have faith that the Holy Spirit inspires us, but I'm not sure how that is done, although evidence for this might be found from conversion experiences.    Perhaps the most trenchant comment on consciousness and The Divine has been given by Rabbi Goldstein in the opening quote.   That being said, I believe that consciousness, along with the deeper levels of quantum mechanics, is now and may continue to be a mystery.

REFERENCES.
* The various views of Mind and Consciousness are explained nicely by John Searle in his book "The Mystery of Consciousness".    A later book by Searle, Freedom and Neurobiology  proposes that quantum mechanics is a necessary basis for free will and thus enters into consciousness.

**In addition to Penrose's books on quantum mechanics and consciousness, there are Quantum Enigma by Bruce Rosenblum and Fred Kuttner, The Mindful Universe by Henry Stapp, Mind,Brain & the Quantum by Michael Lockwood, Quantum Mechanics and Experience by David Albert, and The Conscious Mind by David Chalmers.  The last three explore the relation of the Many Worlds/Many Minds interpretation of quantum mechanics to consciousness.