Free Will and God's Providence:
Part IV--The Many Worlds/Many Minds of Quantum Mechanics

"Do not keep saying to yourself, if you can possibly avoid it, 'But how can it be like that?' [referring to quantum mechanics]because you will get 'down the drain', into a blind alley from which nobody has escaped. Nobody knows how it can be like that.” Richard Feynmann

"If we look at the way the universe behaves, quantum mechanics gives us fundamental, unavoidable indeterminacy, so that alternative histories of the universe can be assigned probability."  Murray Gell-Mann


The video to the right (from YouTube) is from the introduction to the TV show Quantum Leap , which had the hero jump from one possible world to another, saving people in dire situations and altering history.


"It seem to me that if God knows what we will do--even if he does not determine that we do it--we are not totally free in our moral choices.    There need to be options, different possibilities for what we can do, in order that freedom of choice--free will--be exercised... In the fourth post of this series I'll explore what quantum theory might offer to give this freedom."

That part of quantum theory that intersects with Molinism (God's Middle Knowledge) is Everett's Relative State Theory, more commonly known at the quantum Many Worlds Interpretation (MWI) or Many Minds Interpretation (MMI).    I'll give a bare bones summary of the relevant quantum mechanics (and references) and then try to show how the MWI can be joined to Middle Knowledge to give a frame for both God's omniscience and man's Free Will.    Quantum mechanics references are also given in a previous post.    Dear Reader: if all this quantum mechanics jazz makes you queasy (as it does my wife), you can skip to the end of this post to get my take on the connection with Middle Knowledge and Free Will.

THE SUPERPOSITION PRINCIPLE IN QM AND THE MEASUREMENT PROBLEM.

Superposition in quantum mechanics is best illustrated by  the double slit experiment.   In classical optics, if you pass a light ray through two narrow slits you'll see an interference pattern as illustrated in the figure below.

One of the puzzling features of quantum mechanics is that particles (electrons, protons, etc.) can behave like waves (as in the light ray above) and waves  can behave like particles (e.g. light behave as photons) according to the kind of experiment used to study 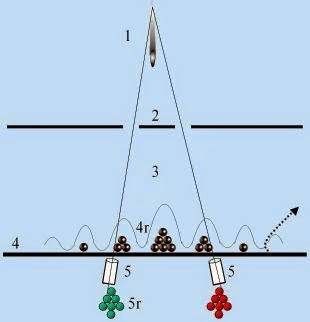 them. Thus, in the figure below, we see particles showing interference patterns, as if they were waves.    (If the screen is removed and collimating tubes added as at the bottom of the figure--even after the particles pass through the two slits, as in the delayed choice experiment )--then there is particle-like behavior;   red and green particles behave as if they passed through the slit without interference effects--no wave-like behavior.

This behavior is represented in quantum mechanics as a superposition of states.    We use the notation " | state>" to indicate a system is in a given state, or for our example of the double slit experiment:
| state> = | left slit> + | right slit>
which is to say that a particle going through the slits is going through BOTH the left and the right slits--it is a superposition, as would be the light wave.       Now if we put a measuring device near the screen with two slits to detect which slit the particle might have gone through (or use the detecting screen removal and collimators), then we get in the common interpretation of QM,
| state> = | left slit> + | right slit> --(measurement)-->| state> = | left slit>  or
| state> =  | right slit>,
That is to say, the measurement process has "collapsed" the state function from a superposition to either a particle having gone either through the left slit or through the right slit, but not both simultaneously.   (Note: what I have termed "state function" is often termed "wave function", although in many instances there is no wave-like behavior associated with it.)

CONSCIOUSNESS AS A MECHANISM FOR COLLAPSE

Measurement interaction with the particle before it reached the screen (in a superposed state)  has effected the collapse, but the mechanism by which this collapse occurs is mysterious,   It is represented by so-called projection operators, but these are not implied by or contained in the fundamental equation of quantum mechanics, the Schrodinger equation.   So the collapse of a superposed state by the appropriate measurement poses a problem of interpretation.

In the early days of quantum mechanics two great theorists, John von Neumann and Ernst Wigner, gave the following interpretation:  since an observer is required for a measurement, and since the final stage of an observed measurement is the belief in the observer's mind of the result of the measurement, one might conclude that consciousness is the means by which the collapse is effected.    This interpretation has been taken up with enthusiasm by followers of Eastern mysticism who do not understand quantum mechanics (see What the Bleep for an egregious example) and by some physicists and philosphers, although it is rejected by many physicists for the reasons given below.

If consciousness is the mechanism for collapse of a superposed state,  how does one explain what happens if no conscious observer is present?    For example, who would the observer be for the universe as a whole?  (One answer might be God--see  Quantum Divine Action via God, the Berkeleyan Observer, but that would clearly not satisfy many physicists.)    What happened in the early universe when there were no conscious observers?   The famed American physicist John Wheeler would answer in his Participatory Universe that the past is created by our observation of it.
A more important objection was raised by Hugh Everett:  if you consider nested observers, for example, conscious A observes state | S>;  conscious B observes (conscious A observing state | S>), you can deduce contradictions if you try to employ  consciousness inducing collapse.    Such contradictions led Everett to his revolutionary  Relative State Theory (see below).

In 1957 Hugh Everett, then a grad student at Princeton under John Wheeler, produced as his Ph.D. thesis a revolutionary interpretation of quantum mechanics he called "Relative State Theory"and in a later publication (1973) "A Theory of the Universal Wave Function".    As Jeffrey Barrett puts it


"[Everett] wants to drop collapse dynamics from the standard von Neumann-Dirac formulation of quantum mechanics, then deduce the empirical predictions of the standard theory as subjective appearances of observers who are themselves treated within pure wave mechanics as perfectly ordinary physical systems.  The problem, however, is that is unclear precisely how Everett intended to account for the determinate records and experiences of observers." J.A. Barrett, The Quantum Mechanics of Minds and Worlds

Everett's idea was to partition the wave-function (state-function) for the Universe into parts for observers and a part (the relative state) for the rest.   A given measurement result would be recorded by a given observer, another result for the same physical quantity by another observer.   The explanatory gap as to how exactly this would be done (pointed out in the above quote) has led to many theories building on Everett's, theories of "Many Worlds/Many Minds".

Other interpretations followed.   (I'm not going to do more than list the most important of these with a brief explanation and online references (where available);  for fuller descriptions, see Jeffrey Barrett's book,  The Quantum Mechanics of Minds and Worlds.)

In addition to the interpretations above, Barrett describes the Bell's (of Bell's Theorem) Everett(?) (sic) Theory,  Relative Facts Theory and Many Threads Theory in his book.

A common objection to all the above theories is that they are "ontologically extravagant"--they propose too much of reality.   But since God is infinite, is that a valid objection?     All the interpretations are supposed to fill  the following two requirements, among others:


None of the theories, according to Barrett, are totally satisfactory from a philosophical point of view.
Nevertheless, I will suggest below how one or another of the above might mesh with a Molinist point of view to reconcile God's omniscience and man's Free Will.

MESHING MANY WORLDS/MANY MINDS WITH MOLINISM

Now, finally we come to the point of this post and I will be brief.   Let's suppose that a science-fiction perspective for personal worlds exists, a multitude of possible worlds  in which there is one where I/my ego/my soul exists.    When I make a moral or ethical decision there will  be, not a splitting into the two different worlds that would ensue from different decisions, but a possibility for me--my ego, my soul--to go into one or another of those worlds.     In this view, God knows of all these possible worlds (the Molinist worlds of God's Middle Knowledge) that might ensue from my moral decisions.    Thus God's omniscience and the availability of choices required for truly free, Free Will, are compatible.

Quantum Enigma: Physics Encounters Consciousness, Bruce Rosenblum and Fred Kuttner--a clear, non-mathematical introduction to quantum physics with an emphasis on the many mysteries.

The Quantum Mechanics of Minds and Worlds, Jeffrey Barrett--a comprehensive review of the various interpretations of Barrett's Relative State Theory, deep philosophically but not mathematically.

The Philosophy, Theology and Science of Molinism, Max Andrews--I have not read this book (it has not been published at the time of writing this post) but it seems that it would be relevant and interesting