Last Days and the Resurrection of the Dead II:
Frank Tipler Does it with Physics 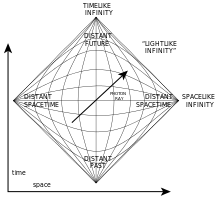 Penrose Diagram, for an Omega Point; Arrow is the "world-line" of a photon
from Wikimedia Commons

"It is our relative insignificance in time, not space, which is the real challenge posed by modern cosmology for traditional religion.  I shall show that this view leads naturally to a physical theory for an evolving God, which I term the Omega Point theory." Frank Tipler, "The Omega Point Theory: A Model of an Evolving God" in Physics, Philosophy and Theology--A Common Quest for Understanding

In the post, Last Days and the Resurrection of the Dead I: Quantum Cosmology and Quantum Logic, I discussed  Andrej Grib's proposition that there would be a "Big Crunch", the universe disappearing in a singularity.    Grib, in his article about this and quantum logic, referred to that Big Crunch being an "Omega Point", proposed by the Jesuit paleontologist and theologian Teilhard de Chardin and later by the American physicist Frank Tipler.   I'll discuss Tipler's version (with which I disagree) in this post,  and then turn to that of de Chardin in a third.

If you do a Google search: "Frank Tipler Omega Point", you'll find several entries with the term "crackpot".    I won't go that far;  if you agree with Tipler's base assumptions, his arguments are cogent, to an extent.   These assumptions are listed below:

1. "...the possibility of a TOE [Theory of Everything]...might imply that there is only one logically possible universe. This would refute...the premise that God had some freedom of choice in creating the universe."
2. "An evolving God is very much in the world, creates it, and is created by it."
3. "...at the most basic ontological level there is nothing but physics and the 'stuff' studied by physics."
4. "...value is something connected with life, and thus if value is to remain in the universe, life must persist indefinitely;"
5. "...I claim that life is a form of information processing (the converse is not true) and the human mind--and the human soul--is a very complex computer program. [emphasis added]"
6. "...the future c-boundary of the universe consists of a single point--call it the 'Omega Point'." Frank Tipler, op.cit.


Let's examine these assumptions.   I don't disagree with #4 (which is not exactly the same as agreeing with it--there are quite a few qualifications that have to be added to make that statement satisfactory).    The pantheism implicit in #2 is rejected by Catholic teaching;  God transcends the universe even though He is immanent in it*.   I also reject the scientism implicit in #1 and #3;  I have posted
many articles** to the effect that much in the world cannot be explained by science, and that even in that prime example of physics theory, quantum mechanics, there is "a veiled reality" which science can not penetrate.  The proposition that  mind is nothing more than the emergent product of a meat computer,  the brain, is one with which many philosophers and scientists would disagree (including the mathematical physicist Roger Penrose, and the philosophers of mind, John Sears and Thomas Nagel).

The term "c-boundary" comes from terminology devised by Roger Penrose in his  cyclic conformal cosmology thesis.  (And this thesis deserves a post, nay a chapter, on its own.)   The c-boundary is defined as the set of points which are not the pasts of any points or the future of any point in spacetime.  The c-boundary is essentially the "edges" of spacetime--the perimeter of the square, as in the diagram above.   As the list of terms in the link gives it, an Omega point is a c-boundary in which an infinite amount of information has been stored***.

Tipler's vision of the Omega Point is described in more detail in his book,  The Physics of Immortality: Modern Cosmology, God and the Resurrection of the Dead.   In the far distant future the universe is contracting.   Super-intelligences (not necessarily carbon-based life) use the shear forces of this contraction for energy.   These intelligences are benevolent:  they can reconstruct and download personalities into computers, where they will live a virtual life (a la' Matrix?), happy and pleasurable.  This virtual life will be essentially eternal, since time will slow down as the universe approaches the Big Crunch (as if one were descending into a black hole).    One remarkable "benefit" of such a virtual life is romantic fulfillment:

And what's the story for females, and those of non-heterosexual inclination? Certainly this is a picture of Heaven different from that given by Jesus:


"For in the resurrection they neither marry, nor are given in marriage, but are as the angels of God in heaven." Matt 22:30 (KJV)

I have raised objections above to Tipler's thesis, and it is evident that it does not correspond to a Catholic position on the transcendence of God, the resurrection of the dead, the Last Judgment and being a saint in Heaven.

*See the Catholic Encyclopedia article on Relation of God to the Universe.

**See, for example, "There's more to there than physics", "Philosopic Issues in Cosmology 4: Creatio ex Nihilo, Theology vs. Physics", "Are All Great Scientists Atheists?", "Tipping the Sacred Cow of Science: Confessions of a Science Agnostic"

***If you go to this link you'll see many terms that are used for Tipler's Omega Point thesis.