Second Ebook Published:
"The Quantum Catholic "(Book 2 of "Top Down to Jesus") 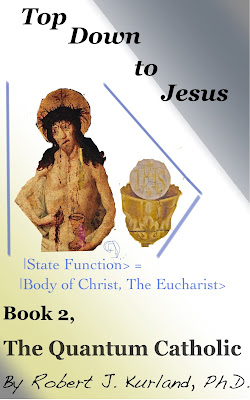 To the right is the cover of my new ebook, "The Quantum Catholic", which has just been published by Amazon.com (as Kindle).   It's the second in the series "Top Down to Jesus".   The third, "War? Science vs. Church" should be out in another month or so.

Here's the Table of Contents and the Preface:

In my blog,  “Reflections of a Catholic Scientist”, of the five most viewed posts, three have to do with the relation of quantum mechanics to Catholic teaching.    That tells me that there are readers who would like to hear more about this relation, and who would also like to get a qualitative understanding of what quantum mechanics is all about.   (When I say “qualitative”, I mean QUALITATIVE—minimal numbers and simple equations.)

I realize there are people (like my wife) whose stomach churns and whose eyes glaze over when numerical propositions are set before them.   So, I find it amazing that a Google search,“Quantum Mechanics simple explanation”,  shows articles with matrices (arrays of symbols), partial differential equations and so forth.

What are my qualifications for writing a book on QM and Catholic teaching?  As an MRI and NMR physicist, I’ve had to use quantum mechanics for my own work.   In fact, perhaps the best paper I’ve done is an application to NMR of the quantum mechanics learned in graduate school.  (Google “Kurland-McGarvey equation”—it’s nice to have a name equation that doesn’t need footnoting,)  I’ve taught classes on quantum mechanics and its applications to undergraduates, graduate students, and medical residents.

On the Catholic side, I’ve had theological training in Ecclesial Lay Ministry classes and in graduate work (post-retirement) at the University of Scranton.     And most important, I’ve done much reading, post-retirement, in both philosophy and theology (references are given at the end of the book);  to quote Samuel Johnson  (Boswell’s Life of Johnson):

"I cannot see that lectures can do so much good as reading the books from which the lectures are taken."

The book begins with a very brief history of the development of quantum mechanics.   There will follow a qualitative account of two fundamental experiments that relate to philosophical interpretations of quantum mechanics, the double slit and the entanglement experiments.   Since there are so many good and interesting sites that give descriptions of these experiments, including animation, I’ll depend on the reader of this ebook to go to the given links and explore them as needs be, for in-depth explanations.

One final note, before acknowledgments:  originally this book was to be the third in a series, “Top Down to Jesus”,    After I spent some time with the second, “War between Science and the Church?”, it struck me that some grounding in quantum mechanics and its intersection with Catholic teaching would be useful as background—hence, the change of order.

I’d like to express my gratitude to those teachers, fellow students, and colleagues (way back when) who helped me understand how to use quantum mechanics and to the students who asked the embarrassing questions that increased my understanding of quantum mechanics.   And finally, of course, a debt of gratitude to my wife, (a historian) who has helped me make all this intelligible to non-scientists and math-phobes.

Comments, both laudatory and critical, are invited.   Purchases will be even more welcome.*

NOTE:
*The book has also been submitted to other outlets through "Draft2Digital".

Email ThisBlogThis!Share to TwitterShare to FacebookShare to Pinterest
Labels: Quantum Catholic, quantum mechanics and Catholic teaching, Top Down to Jesus